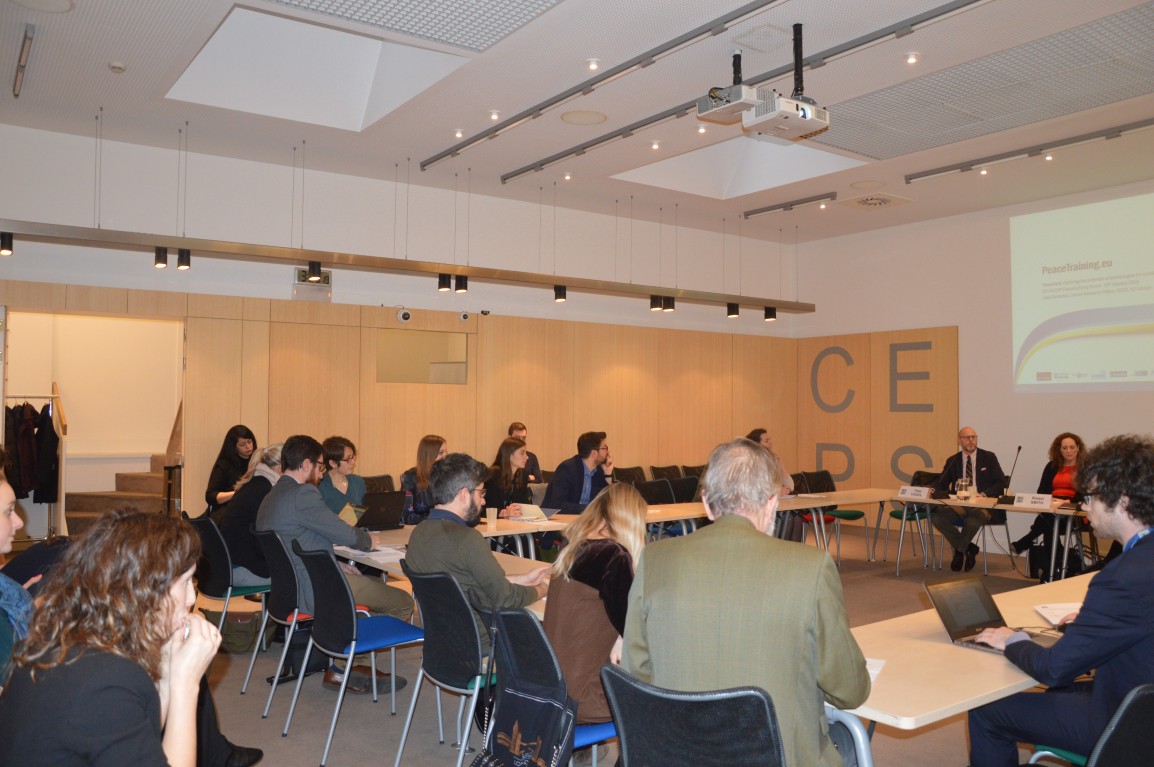 The fifth Conflict Prevention and Peacebuilding Forum under the H2020-funded EU-CIVCAP was organised by consortium member CEPS, in a collaborative effort with PeaceTraining.eu, on 15 January 2018.

The Forum, which was attended by approximately 40 experts and observers, heard presentations from researchers from three H2020 funded projects (EU-CIVCAP, PeaceTraining.eu and GAP) on various aspects of technology, ICT and big data and their potential role in reducing the likelihood of conflict and contributing to building sustainable peace, with a focus on early warning, rapid response, imagery analysis and training.

Policymakers and practitioners in conflict prevention, management, and resolution have been turning their attention towards new technologies and analysing their potential in helping international and local actors utilise innovative technologies in security operations.

On 15 January 2018 the fifth Conflict Prevention and Peacebuilding Forum under the EU-CIVCAP project, funded by the European Union’s Horizon 2020 Programme, invited, in cooperation with PeaceTraining.eu, three researchers to consider questions including what to expect from new technologies in security policy and how to ensure that their full potential in conflict prevention and peace missions is realised.

Leila Demarest, Senior Research Fellow at the Centre for Research on Peace and Development at KU Leuven, presented PeaceTraining.eu, an H2020-funded project whose goal is to use e-learning to help improve European capabilities in peacebuilding operations. Technology helps share best practices more efficiently and widely by reaching applicants who might not be able to be physically present for training modules, although due to an access gap, participants tend to be located in developed countries where high-speed internet access is readily available. The bottleneck of internet access also means that courses are often more basic, for example in the form of PDF documents, than technological innovation would allow. There is also a lack of certainty that knowledge actually sticks.

Róisín Smith, a Research Fellow at the Edward M. Kennedy Institute for Conflict Intervention at Maynooth University, presented Gaming for Peace (GAP), a new H2020-funded project aiming to enhance the development of soft skills such as communication, collaboration and gender awareness for personnel to be deployed on Conflict Prevention and Peacebuilding (CPPB) missions. Smith summarised the main improvements brought by new technologies in four components of peacebuilding missions: data processing, communications, gaming and engagement. She also suggested that ‘Serious Games’ – those games that explore scenarios through role-playing – were an innovative tool for preparing personnel about to be deployed in CPPB missions, offering learning opportunities that did not normally occur in a classroom setting.

Cristian Barbieri, Junior Researcher at the Istituto Affari Internazionali (IAI) in Rome, presented early findings from DL 2.4 on dual use technologies and its application to EU conflict prevention and peacebuilding. More specifically, Barbieri evaluated the role of Remotely Piloted Aircraft Systems (RPAS) and satellites and explained their potential use in civilian crisis management. The deliverable examined the current state of development of these dual use technologies both at the EU and at the Member State level (citing the cases of France, Germany, Italy and Sweden). According to Barbieri, the European Commission and EU agencies need to work together in order to help develop the Member States’ defence industries through the new European Defence Fund. This could help enhance the efficiency of defence technology, including that used in peace operations.

The most pertinent questions and observations from the audience concerned:

Cristian Barbieri is a former EU-CIVCAP Staff Member. This profile represents his biography at the time he worked for the project.

Toby Vogel is a writer on foreign affairs based in Brussels, where he also works as a research communications officer in the foreign policy unit of CEPS.