According to the Treaty on European Union, ‘equality’ is one of the principles that should guide EU external action, including conflict prevention.

Intersectional feminist analysis examines how power – in its different forms – is acquired, maintained, used and lost by different people in society. The analysis is intersectional because it recognises the extent which identities such as race, ethnicity, socioeconomic class, (dis)ability, sexual orientation, religion and geographic origin, amongst others, intersect with and influence gender identities.

‘Gender’ is of course more complicated than a simple male/female binary; it denotes a set of roles, such as businesswoman, mother, husband, son, breadwinner, warrior, that are socially constructed and maintained and challenged by men, women, girls and boys in society.

Gender relations – the crux of gender and feminist analysis – are of course context specific. A context – and certainly a conflict – cannot be understood fully without taking into account the power at play between different intersectional identities. A rural, uneducated peasant man would generally hold less social, economic and political power than an urban, educated woman, even in societies where most women hold less power than men.

Analysis of the EU’s Global Strategy and other key foreign policy documents shows that EU foreign policy is heavily gendered. Men’s power is invisible yet runs throughout the document. Male victims of violence, especially sexual violence, are ignored. There is some opportunity for European women to engage, but non-European women are treated as passive and vulnerable. They are routinely infantilised, lumped together with children and youth. They are sexualised recipients of aid. They are not imagined as peacebuilders, fighters, political, social, economic or cultural leaders. From time to time, they may be spurred into action by EU support or radicalised by a man; the idea that women in conflict-affected areas may have their own agendas, interests and motivation is entirely absent.

A closer look at EU conflict prevention policies shows that these policies are gender-blind by design. Gender analysis is not integrated into conflict analysis. Given that gendered power relations are central to how societies work, this means that conflict analysis will be partial and incomplete, and so not fit for purpose. Interventions are also likely to ‘Do Harm’, particularly by reinforcing gendered inequalities in society.

“Kissing the frog” outlines how gender-blindness is undermining the effectiveness of policies in societies in, or at risk of, violent conflict. This can be seen, for example, in preventing and countering violent extremism and counter-terrorism policies. The assumptions underpinning these policies – who an extremist is and how they are recruited, for example – are deeply gendered, yet the policies are not based on gender analysis. These assumptions therefore remain unchallenged, undermining the potential effectiveness of the policies.

If the EU wishes to prevent violent conflict successfully, that is, to support better peacebuilding and peacemaking processes, then it must engage with women peacebuilders and peacemakers throughout the society, not only in the capital. It cannot continue to engage women primarily on so-called ‘women’s issues’, which are usually limited to dealing with the effects of sexual violence. The whole range of women’s views and opinions should be engaged on the wide range of political, social, economic and security questions at the heart of peacebuilding.

Improving the diversity within EU peace and security institutions and organs is important in its own right. The EU’s organs should be more inclusive and have gender parity, because so long as White middle-class men dominate these institutions, the EU radically reduces the pool of talent it has to draw on, so cannot be recruiting the best people. It is, aside from anything else, a poor use of resources. We need to be aware, however, that the fact that ‘quick wins’ for gender equality have been secured within institutional recruitment practices does not mean that gender equality is central to conflict prevention policy and practice.

Ensuring gender equality within the institutions is not the same as ensuring that gender equality becomes a specific objective of conflict prevention policy, the latter being the main interest of “Kissing the frog”. The idea that feminising an institution automatically makes it less violent or more concerned with the needs of the populations it is meant to serve is, in short, fanciful.

There is an urgent need for the EU, peacebuilders and feminists (none of which are mutually exclusive categories) to re-imagine EU conflict prevention policy, with gender equality at its heart. This will make the EU better at helping to prevent violent conflict, and it may contribute to the positive transformation of unequal gender relations both within the EU and particularly in environments in, or at risk of, violent conflict. 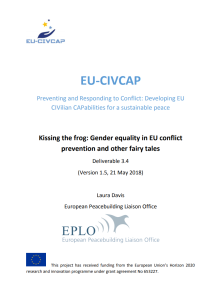 Title photo caption: Viviane Reding, Vice-President of the EC in charge of Justice, Fundamental Rights and Citizenship, participated in the informal meeting of Ministers responsible for gender equality. 26/10/2010.

Laura Davis is a scholar and practitioner specializing in EU foreign policy, transitional justice and peace mediation, including women’s participation in these processes.